Fears of hit to business growth from corporation tax rise

Ireland has maintained its position at the top of the global corporate tax league tables*, shows a new study by UHY, the international accounting and consulting network.

The Republic of Ireland’s corporation tax rate has been at an historic low of 12.5% since 1998. However Ireland has announced that it will raise its rate of corporate tax to 15% for companies with a turnover of over €750 million, which will significantly narrow its lead at the top of the league table (see table below).

This move has prompted concerns that the rise in the corporate tax rate will impact the Irish economy as it recovers from the pandemic. So far, the Irish Government has made no indication that it plans to increase corporation tax further than 15% for large companies and 12.5% for smaller businesses. However, it may eventually be forced to do so in order to recoup public money spent during the pandemic.

Corporate tax receipts in Ireland for the current tax year have far exceeded official projections. In December 2021, €13.5bn had been collected through the tax – 28.5% or €2.8bn higher than expected.

“There are concerns that the increase in rates may start to dull Ireland’s lustre amongst these multinationals and lead to a slowdown in investment and job creation.”

“The higher the corporation tax rate, the less businesses have to reinvest in expansion and R&D. We need to make sure that the way we tax businesses balances the need to pay for the costs of the pandemic with remaining competitive and creating high-quality jobs in Ireland.”

“The cost of the Covid pandemic, in terms of both lost tax revenues and Government assistance, has to be paid. The question for Ireland is whether the best way to do that is through taxes on business.” 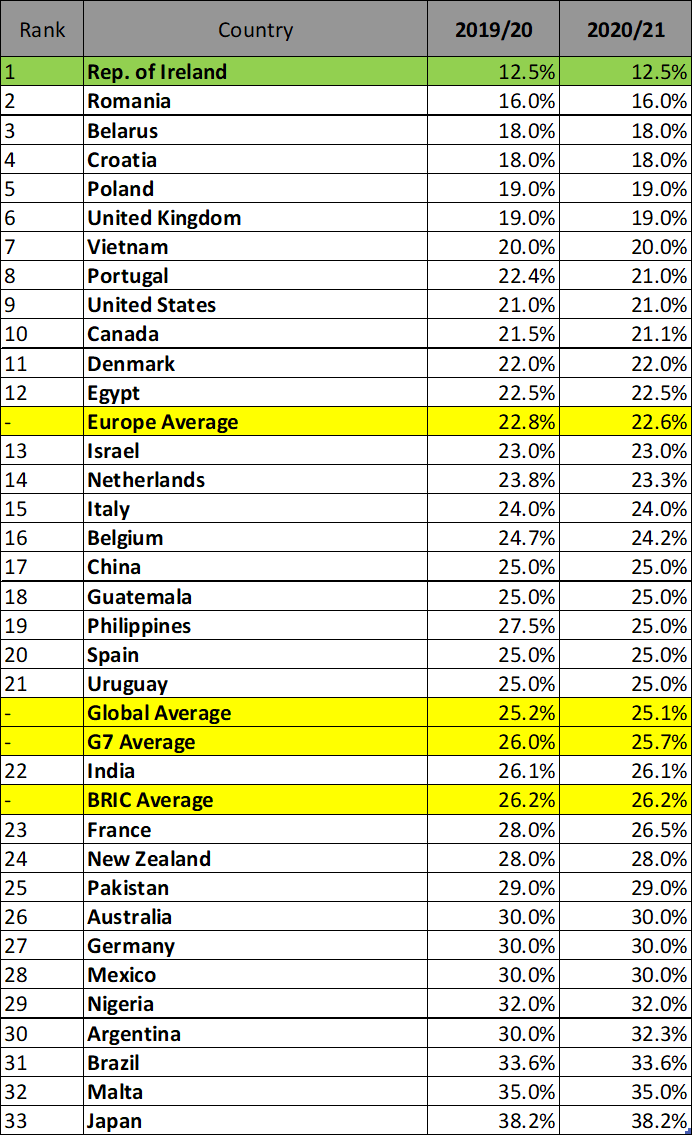 UHY says that the long period of declining corporate tax rates globally appears to be ending as many governments worldwide look to increase taxes on business to help pay for the costs of the pandemic. Countries including the UK and Argentina have already announced measures to increase taxation of corporates, while US President Joe Biden has also signalled his intention to roll back part of the corporate tax cut implemented by Donald Trump in 2017.

The OECD announced in October that 136 countries have signed up to a deal to enforce a minimum corporate tax rate of 15% from 2023. The deal will also allow countries to tax multinationals that make sales within their jurisdictions even if they do not have a physical presence there.

As a result of growing political pressure, some lower-tax jurisdictions will likely now have to increase their corporate tax rates for multinationals. The Republic of Ireland has come under pressure for its low corporate tax rate.

These corporations are a key target for government clampdowns worldwide, with some multinationals choosing to operate from lower-tax countries, resulting in them recording lower profits in higher-tax countries.

Our new study of 33 countries worldwide shows that corporate tax rates have been steadily decreasing over recent years. The G7 average for a business recording profits of 1 million USD falling from 32% in 2014/15 to just 25.7% in 2020/21. Many countries sought to incentivise businesses to invest in their economies with attractive tax rates. France, often seen as a higher tax European economy, has lowered its headline rate from 31% to 26.5% in just the past three years.

However, with the Covid-19 pandemic leaving a gaping hole in the public finances of countries around the world, some countries are already beginning to raise their corporate tax rates.

The UK government already announced its intention to raise corporation tax rates to 25% from April 2023, more than two percentage points higher than the European average.  Argentina already increased its headline corporate tax rate from 30% to 35% in 2021. US President Joe Biden has also pledged to raise federal corporate income tax to 28%, after it was cut to just 21% by his predecessor Donald Trump in 2017.

We believe governments worldwide should ensure that any move to raise corporate tax rates does not affect the lower rates used to encourage the growth of SMEs. The Netherlands has recently reduced its corporation tax rate to just 16.5% for companies with taxable income under $450,000, while Croatia now offers a rate of just 10% for companies with a turnover of less than $1,125,000.

SMEs form the foundation of economies worldwide, employing millions of people and a path to sustainable economic growth. Encouraging SME development with tax incentives will be crucial to the post-covid recovery of both developed and developing nations.