Passenger car market in Ireland a journey through the last decade

A journey through the last decade

The Irish automotive industry has had an interesting history, which dates back to the early twentieth century. We have developed a white paper on the passenger car market in Ireland and attempted to cover the interesting journey of this sector since the recession in 2008. Our objective is to provide you with a detailed perspective on how market volumes have swayed during this period, the possible reasons therefore and a view to the road ahead to help you with planning for the future of your business.

Below is based on information from our white paper which you can obtain a free copy of here (https://fdw.ie/auto-stats/)

The overall performance of the Irish car market has historically demonstrated a high degree of correlation with the performance of the wider economy. The growth we have seen in the Irish economy between 1995 and 2008 was accompanied by a massive growth in vehicles licensed as well as passenger kilometers travelled. The sector did however witness a decline during the recession.

COVID-19 brought decline in the market with new car registrations plummeting to historical lows in these months. The recovery expected from July 2020 was heavily dented by the decline brought about by the pandemic. 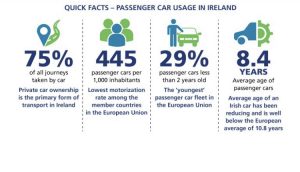 The Decade That Went By

Private cars have traditionally been the dominant mode of travel in Ireland. Passenger Cars form a significant chunk of the country’s automotive sales. Out of 2.73 million vehicles on Irish roads in 2018, almost 2.22 million where private cars. Despite this the market has gone through a rollercoaster ride. In 2013, the market witnessed a slump thanks to the superstition that a ‘13’ registration would bring bad luck to owners. As a result of this the Irish government brought in a new license plate system under which the cars registered between January and the end of June had a ‘131’ registration and those after had a ‘132’ plate.

The year 2014 was one of solid recovery. This strong trend continued over to 2015 and 2016 which witnessed the peak in car registrations before the Brexit referendum. The demand for new cars has since dwindled, however the total number of registrations increased marginally. Largely driven by a steady increase in used car imports. Before 2017, used car imports averaged less than 50,000 units but have since grown almost 55% in 2019 with steady annual growth.

In 2019 hatchbacks remained the most preferred type of new cars sold in the republic, accounting for 35% of the market although still the most popular the share of hatchbacks has seen a drop from the 54% in 2009, the declining market of hatchbacks has resulted from the growing popularity of SUV’s. SUV’s accounted for 23% of the market in 2019 compared to 7% in 2014 and only 2% in 2009.Saloon cars in Ireland have taken a nosedive. The share of saloons declined to 16% in 2019 from 32% in 2009. Traditionally in Ireland most cars have been operated by manual transmission, this is mainly because of their cheaper price, although manuals still remain the major transmission type it is beginning to decline, in 2009 the market share was 90% fast forward ten years to 2019 and it stands at 70%.this can be attributed to the fact that many manufacturers are only producing automatic transmission vehicles now. The environmental considerations involved also play a huge part in this.

The engine type in passenger cars has also seen a change over the last decade. Diesel cars accounted for 73% of total registrations in 2009 but comprised only 47% of the market share in 2019. This decline can be attributed to the diesel gate scandal and uncertainty surrounding tax legislations. Given this backdrop the Irish car market has seen another shift. In 2019 12.8% of the market was filled by electric cars with hybrids accounting for a large portion of this. Between 2014 and 2019 electric car registrations have increased tenfold. The recent boost in electric cars is in line with the Irish government target to have 950,000 electric vehicles on the road by 2030.

The road ahead for the Irish car market appears to be uncertain. The chances of any recovery in the remainder of 2020 remain bleak, on the back of general weakness in the economy. There might be an upturn in 2021 when the economy is expected to witness a gradual recovery.