• Ireland has one of the highest tax burdens among European countries

High earners in The Republic of Ireland pay 14% more in tax compared with the European average according to new research from UHY International, the international accountancy network*

In the Finance Act 2018, several changes were made to income taxes to try and alleviate the tax burden on middle income taxpayers. For example, the threshold for the higher rate of income tax was increased to €35,300, up from €34,550 previously.

Ireland has the 5th highest tax burden out of the 30 countries who participated in the study, according to how much tax the government takes from the incomes of high earners (see table below).

Out of all the countries studied, Russia had the lowest income tax rate, where all tax payers, including high earners, pay just 13% income tax.

Denmark taxes individuals earning 1.5 million USD, over half of their income – 53.2% in total – ranking the highest among the 30 countries studied,

Alan Farrelly, Managing Partner at UHY Farrelly Dawe White, member of UHY comments: “The Irish government has to be careful not to alienate high earners with an uncompetitive tax rate.”

“At the moment high earners in Ireland take home 54% of their pay compared to 59% on average among other European countries. That is a noticeable difference that could create a long-term challenge to our aim of attracting in high paid jobs in areas like financial services and technology.”

“With the Budget around the corner, the income tax rate is unlikely to change with Minister for Finance Paschal Donohoe saying it would be far better to preserve resources to deal with the possibility of a no-deal Brexit, rather than reducing taxes in Budget 2020 and that he would not make the mistake of cutting income tax rates now, only to have to increase them in the next Budget.”

“Ultimately however a balance needs to be struck between the Government collecting enough tax revenues and not overtaxing to the point that high earners are disincentivized.”

UHY notes that high earning Western European taxpayers are still being taxed at a higher rate than peers in BRIC and developing economies.

G7 countries including France, Canada the US and UK, have all recently taken measures to reduce or withdraw top rate tax bands imposed following the financial crisis. In 2014 for example, France’s rate of 45.8% (on a 250,000 USD income), was substantially higher than the current rate of 40.0%. In 2014, the French government also decided to scrap the country’s 75% marginal rate on incomes above €1 million.

Rick David, Chairman of UHY International, says: “Taxes on the top earners residing in G7 economies have eased off slightly since the changes imposed after the financial crisis.”

“Many Western European governments are still concerned though that their jurisdictions may become uncompetitive given the low tax rates in other developing jurisdictions so a number of countries have now taken steps to reduce their top rate of tax.”

“However as developing countries mature and their middle classes expand, governments may decide to increase their marginal rates of tax on higher earners to meet greater demand for public services. This is beginning to happen in Asian countries such as India and China which have gradually been taxing higher incomes more and lower incomes less.”

“Over time, as the population of developing countries becomes wealthier, this tax disparity between the G7 and BRIC economies could reduce.” 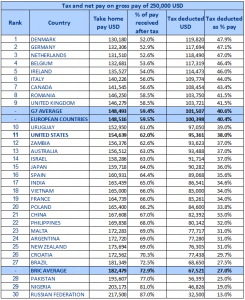 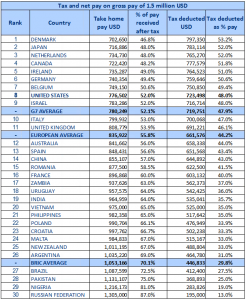 *UHY studied tax data in 30 countries across its international network. The study captured the ‘take home pay’ for low (25,000 USD), middle (250,000 USD) and high income workers (1,500,000 USD), taking into account personal taxes and social security contributions. The calculations are based on a single, unmarried taxpayer with no children.